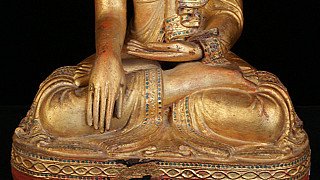 A mudra in Buddha statues is a gesture and body posture holding special meanings and commemorating few of the important moments in the Buddha's life. One of the most common and popular mudras which are found depicted in Buddha statues is the Bhumisparsha mudra, translated as the earth touching gesture. Buddha statues with this mudra are commonly known as the "earth-witness" Buddha and these iconographic representations are one of the most popular Buddhas you can find anywhere in the world.

In Buddha statues with the Bhumisparsha mudra, the Buddha, more specifically, the historical Shakyamuni Buddha is seen seated with his right hand as a pendant over the right knee reaching toward the ground with the palm inward while touching the lotus throne. In the meantime, the left hand can be seen with the palm upright in his lap. This gesture represents the moment of the Buddha's awakening as he claims the earth as the witness of his enlightenment. Just before he realized enlightenment, it is believed that the demon Mara tried to frighten him with the armies of demons and monsters including his daughters who tried to tempt him to get out of meditation under the Bodhi tree. While the demon king Mara claimed the throne of enlightenment for himself, his demon army claimed to be the witness for Mara's enlightenment. Mara then challenged Siddhartha about the witness. Then the former prince reached out his right hand to touch the earth as it is believed that the earth itself roared "I bear you the witness!" Hearing the roar from the earth herself, the demon king disappeared. The following morning saw the first appearance of the one who is awakened, the Buddha. Hence, it is believed that the Bhumisparsha mudra, or "the earth witness" mudra commemorates the Buddha's victory over the temptation by the demon King Mara.

This particular mudra does not only represent the defeat of Mara and his demonic army by the Buddha, it also represents the unwavering or firmness shown by the Buddha while he was in the pursuit of enlightenment by meditating under the Bodhi tree. Similarly, the Bhumisparsha mudra also signifies the union of skillful means or Upaya which is well represented by the right hand touching the earth, and wisdom or Prajna, which is represented by the left hand with its palm facing upward on the lap in the meditation position. As the story tells about the earth being the witness of the Buddha's enlightenment, the Bhumisparshamudra depicts the Buddha's firm belief and effort while pursuing the path of enlightenment. This mudra is also portrayed in the statues of many other Buddhas like the Dhyani Buddha Akshobhya along with Shakyamuni Buddha. It is believed that the Bhumisparsha mudra was used by Akshobhya to transform the delusion of anger into wisdom. Therefore, in Buddhism, it is believed that the Bhumisparsha mudra helps us to bring about the transformation from rage and anger to wisdom.