The Potala Palace, the former residence of many Dalai Lamas

The Potala Palace is a World Heritage site and was used to be the chief residence of the Dalai Lama until 14th Dalai Lama. The Potala Palace is located in Lhasa, Tibet Autonomous Region, China. The Potala is named after famous Mount Potala which is the mythical abode of bodhisattva Chenresi ( Avalokitesvara ). This palace is one of the central figures in Buddhism since many generations of Dalai Lamas used to reside there. Potala Palace rises up to 300 m above the Lhasa Valley on top of Marpo Ri hill. This palace is the greatest monumental structure in all Tibet. The building measure about 400 m east-west and about 350 m North-South with a sloping stone which is about 3m thick and 5 m thick in the base of the building. This building has a copper on its foundations for proof against earthquake. Thirteen stories of building consisting of more than 1000 rooms, about 20,000 statues (among them a few very important Buddha statues ), and 10,000 shrines. 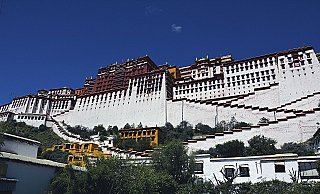 During 7th Century Songsten Gampo built a palace in Marpo Ri Hill which stood till 17th Century when 5th Dalai Lama decided to incorporate the existing building into the foundations to build an even greater building which still stands today. The construction of The Potala Palace began in around 1645 AD under the reign of fifth Dalai Lama. Until the end of 1648, The While Palace (The Potrang Karpo) was completed. Between 1690-1694, The Red Palace (The Potrang Marpo) was added in the palace which required more than 7000 workers, and 1500 artists and craftsmen. Today it is one of most beautiful world heritage sites in the world. In 1922 A.D. the 13th Dalai Lama renovated the Potala Palace renovating many chapels and assembly halls of Potrang Karpo and added two stories to the Potrang Marpo. In 1994 A.D. the Potala Palace was inscribed to UNESCO WORLD HERITAGE LIST.

The Potala Palace was built at an altitude of 3,700 m on the side of Red Mountain in the center of Lhasa Valley. There are two small chapels which date from the seventh century, The Phakpa Lhakhang and The Chogyal Drubphuk. These are the oldest and the most sacred surviving structures on the building of The Potala Palace.

Also Known as The Potrang Karpo is a part of The Potala Palace. This part of the building were the living quarters of The Dalai Lama. The White Palace contains various sacred gold stupas- The Tomb of eight Dalai Lamas.

Also known as The Potrang Marpo is a part of The Potala Palace which is used completely for religious study and Buddhist prayer. The Red Palace consists of many different halls, chapels, galleries, libraries, and most important of all: the tomb of The Thirteenth Dalai Lama. The architecture of Red Palace consists of following parts:

This magnificent palace was named as "New Seven Wonders" by the American Show "Good Morning America" and newspaper "USA Today" for its vast architectural structure.