Buddhism is reaching out to more and more people in the world. The followers of this particular religion have increased rapidly not only in the eastern part of the world i.e. Asia but also in the western world of Europe and America. Consequently, the increase in followers means the increase in the demand of various forms of Buddhist arts for both religious as well as collection purposes. These artifacts are considered holy and are taken as the items of huge importance for the followers of Buddha and Buddhism. Buddha statues are one of the most popular as well as demanded Buddhist artifacts all over the world. This is natural considering the way they represent the Buddha in his physical form. Another Buddhist artifact of such importance and demands is Buddhist Amulets or Buddha Amulets. 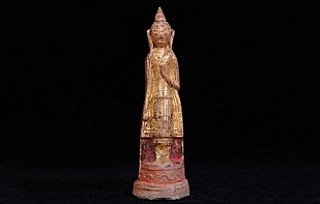 For the followers of Buddhism, Buddhist amulets are blessed items. These amulets are small and mystically powerful objects which is believed to have ability to provide a person carrying it with good fortune and protection from any kind of mishaps in their lives. Similarly, amulets are also believed to be a way to get closer to the Buddha, especially if a person wears it around his or her neck. The Buddhist amulets (or Talismans as they are also known as in the western world) are carried upon by the members of various Buddhist communities all over the world, especially by the communities following the Theravada Buddhism in the mainland Southeast Asia like Thailand, Laos, Burma and Cambodia. Almost every Buddhists in these countries has at least one Buddhist amulets. Also carrying it as a great respect for the Buddha, it is common sight for these amulets to be worn by people of every age in these countries. Though the teachings of Buddha do not encourage the use of amulets, today's Buddhists surround themselves with as much protection as possible by wearing, carrying or keeping at least one amulet at home and workplace. Explicitly Buddhist in form, these amulets often take the form of small Buddha statues or representation of various holy monks. Similarly, these Buddhist amulets can also be seen in the form of small Chaityas or Buddhist stupas.

Buddhist amulets are primarily used as a way of collecting funds for the temples or monasteries producing the amulets. Traditionally, the followers and worshippers of the Buddha would be able to obtain an amulet as a blessing from a Buddhist monastery by simply donating money or oil for the monastery. After the donation procedure is carried out, the monk of the monastery will give the amulet as a gift to the followers. This gift, with the change of time, later changes into a tool to help enhance luck in different aspects in the lives of the followers. Thailand has a peculiar tradition to place the Buddhist amulets under a stupa or any other Buddhist shrine structure when it is constructed. There have been many instances where many amulets were found following the collapse of these structures.

The Buddha amulets come in various styles and shapes. They are primarily made of materilas like metal, wood, bone or plaster. An amulet may contain ash from the burnt incenses or old temple structure, hair of famous monks, etc. in order to increase the protective power of the items. After an amulet are made, the maker will then request the monks residing in the monastery or from the other monastery and practice will, chant prayers and bless them. For an authentic Buddhist amulet, this process may take almost three years.

Thailand is one the world's biggest producers, sellers and exporters of Buddha amulets. These amulets are available in every village and city in the country. The price of these amulets not only depends upon their appearances but also their origins, maker, age and the class of spells enchanted upon them. Like rare and antique Buddha statues, some rare or antique Buddhist amulets can fetch enormous amount of money. Therefore, it is easily understandable how this particular Buddhist artifact has been in demand in the Buddhist world.