Sariputra was born in a Brahmin family. His father name was Vanganta and his mother name was Rupasari. Sariputra original name was Upatissa and he was called Sariputra due to his mother. Sari was his mother name and Putra means son. Sariputra was born on the same day as his youth friend and another chief disciple of Lord Buddha, Moggallana. It was the time of the festival that used to be organized in Rajagaha and Sariputra with his best friend Moggallana went to attend it. They happened to attend one theatrical play and that play triggered them to search for more knowledge to find the truth of life.

Both of them became ascetic and choose to look for the truth of life. Both of them became disciple of the religious leader of that time, Sanjaya Belatthiputta . Both stayed with Sanjaya for some time, but they were not satisfied with the teachings of Sanjaya and decided to leave him. It was then when they came across Buddhist monk Assaji. Assaji was one of the first five disciples of Lord Buddha. Both Sariputra and Moggallana asked Assaji for his teachings. Then Assaji replied

Of all those things that from a cause arise,
Tathagata the cause thereof has told;
And how they cease to be, that too he tells,
This is the doctrine of the Great Recluse.

When both of them heard such words, they began their journey to hear the teachings of Lord Buddha. 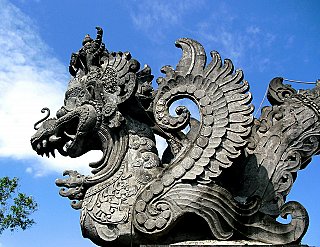 According to Pali texts and history, after hearing from the disciple of Lord Buddha,Sariputra was greatly moved and had a sight into Enlightenment. They become Buddhist monk shortly and became one of the most respected disciples of Lord Buddha. After two weeks of becoming Buddhist monk, Sariputra was asked for the task of fanning Lord Buddha while preaching the sermon since Lord Buddha saw the potentiality and fate of Sariputra through divine eye.

After accepting the task of fanning Lord Buddha and listening to Buddha preaching so closely, he attained Enlightenment and became an arahant. Shortly after Sariputra started preaching with the approval of Lord Buddha and was called General of Dharma. Buddha usually taught him about Abhidharma, one of the three baskets of Tripitaka, and later he mastered and regarded as the founder of Abhidharma tradition. Buddha often praised highly of him and even declared him the spiritual son of the Blessed One. Buddha even regarded him one of the chief assistants in turning the Wheel of Dharma. Sariputra was a selfless monk who always tried to help other to realize enlightenment. He even visited the sick and looked after the sick people, young as well as older monks in the Sangha.

Departure and The Last Task

When Sariputra realized that his departure from this world is getting near, he requested to leave Lord Buddha and returned to his birthplace to his mother. At first, Rupasari didn’t believe in Dharma despite her son being the chief assistant in turning the Wheel of Dharma. When heavenly beings came to give their respect to Sariputra before his last departure, Rapasari was moved. Then Sariputra helped her to see the sight on the path of Enlightenment. Shortly after Sariputra died in the room he was born before Lord Buddha attained Parinirvana. His best friend Moggallana also died before Lord Buddha while traveling. When Ananda heard of his death, Ananda was deeply distressed, and passed the news to Lord Buddha , Buddha consoled him stating that this was the natural process and Ananda should not be distressed since Sariputra was aware of such phenomena.