Samantabhadra is depicted as Bodhisattva dressed as royalty with lotus leaf in his hands “Parasol” and ride on an elephant with six tusks. The six tusks of the elephant represent six senses or sometimes six sense organs (ear, eye, nose, tongue, body, and mind). In Nyingma School of Tibetan Buddhism, Samantabhadra is considered as the primordial Buddha.

Appearance of Samantabhadra in Buddhist Sutra 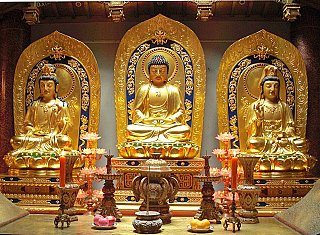 Bodhisattva Samantabhadra appears in many chapters of various Sutras of Buddhism.

Samantabhadra Bodhisattva is the key and iconic figure of Gandavyuha Sutra. He appears particular in the last chapter of the Sutra. In this sutra, Samantabhadra is seen to teach the student Sudhana about the wisdom that only exists for the sake of all sentient beings and must be practiced for the sole purpose of benefitting the living beings.

• To worship and pay homage to all Buddhas

• To praise the virtues of Buddha (Tathagata) and preach them

• To give various offerings to all Buddhas generously

• To confess misdeeds and evil karma and repent for them

• To teach preach the Buddha teachings ( Dharma ) on request of Buddha

• To request, Lord Buddha to remain the world

• To live in harmony and help to benefit all beings