Nagarjuna, known as the greatest Buddhist philosopher and was also considered as the king of nagas. 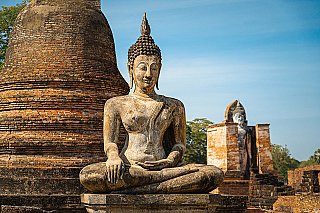 Nagarjuna was considered as the most important philosopher after Gautama Buddha in the history of Mahayana Buddhism. One of the most important philosophies that Nagarjuna contributed to Buddhism was the concept of Sunyata. The sunyata simply means emptiness and Nagarjuna concept of Sunyata was about bringing together main Buddhist doctrines. Nagarjuna particularly tried to bring Buddhist doctrines such as Anatman not-self and Pratityasamutpada dependent origination. According to Nagarjunas Concept on Sunyata, all sentient beings cannot exist independently thus these sentient beings are without any self-nature.
Another greatest philosophy proposed by Nagarjuna was the concept of Two Truths. According toNagarjuna, there are two truths or two levels of reality in Buddhas teachings. Thus, the concept of Two Truths was the key things in the development of Two Truths Doctrine of Mahayana Buddhism. The Two levels of reality or Truths represent two types of truths in Buddhist Course. These two truths are relative truth and absolute truth. The relative truth is also known as the commonsensical truth and the relative truth describes the experience in the concrete world or life. The absolute truth is also known as the ultimate truth and the absolute truth refers to the reality of Sunyata.

Nagarjuna as Friend of Nagas

The legend of Nagas can be found in the myths of Hinduism as well as Buddhism. Nagas are the snake beings and according to Buddhist tradition, they are from the unseen realms. According to legend related to Nagarjuna, nagas were keeping and protecting sutras that contained the teachings of Buddha and they are hiding these sutras from mankind. Nagas entrusted these sutras to Nagarjuna and asked him to take the sutras back to the human realm. The sutras entrusted to Nagarjuna were called Wisdom Sutras and Nagarjuna collected these sutras under the Prajnaparamita Sutra (Perfection of Wisdom). Thats why Nagarjuna is remembered for his work on Wisdom Sutras.

Madhyamaka School is the school that refers to Mahayana Buddhist School that is based on the philosophy of Nagarjuna on Middle Way.

"“Whatever is dependent arising; We declared that to be emptiness. That is dependent designation And is itself the middle way.”"
- Nagarjuna

According to Madhyamaka, all phenomena are dependent and are empty and without essence. They have no independent reality of their own.