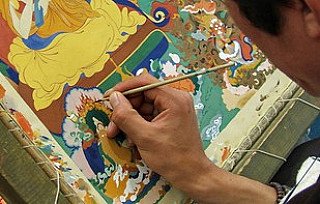 The thangka is a painting on cotton or silk clothing which usually depicts a deity of Buddhism in a scene or a mandala. Unlike the contemporary and any other oil or acrylic painting, the thangka is not a flat painting but it contains a panel which is usually painted over a mounted textile and then laid over by a cover which is usually made of silk. The thangkas, in general, last for a long time and retain much of the details for a long period of time which is done after storing and keeping them in a dry place and out of moisture's reach as they are very delicate in nature because the moisture affects the quality of silk. These delicate paintings are produced by different painters and tailors with various intents, training and skills. The specifications of the thangkas, differences in style, change in form and altered mountings in the Thangkas complicate the issue of the origin and the meaning of the Thangkas.

The translation of the Tibetan word Thang Ka is 'recorded message that can be rolled'. Travelling monks and lamas in Tibetan Buddhism used Thangkas to spread and teach the stories about the religion of Buddhism. Thangkas were normally used by these lamas and monks as they could be rolled and unrolled, which provided the ease of transportation in order to suit the needs of many nomadic clans in the region of Tibet. These paintings communicate and spread a message to a practitioner and help them to lead themselves towards the teaching of Buddhism. Also, the Thangkas are also used as a medium by many people to aid themselves in meditation through the visual representation of a deity. The Thangkas also fulfill the purpose in many ceremonies as they can be unrolled on certain holidays or festival for the locals and followers to view and worship. 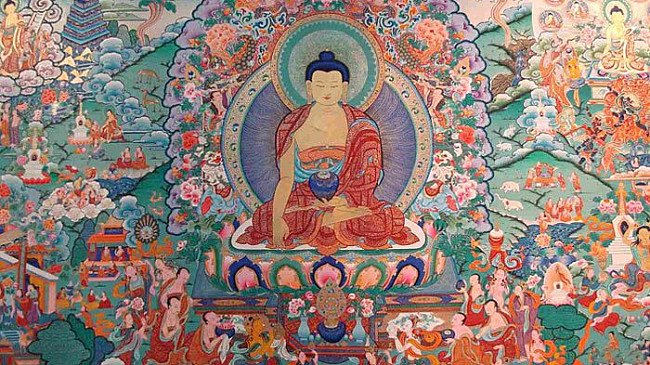 The Thangkas hold a deep meaning which can be further explained as they normally are the visual representation of the fully triggered enlightenment, which is the ultimate aim and goal of the spiritual path of Buddhism. This is also a reason for Thangka to be called the roadmap towards enlightenment. The delicate amount of details of exact amount of proportions and measurements of each deity is required for the painter to paint the Thangka which were formerly established by Buddhist iconography and artistic practice.

The thangkas we sell in our online gallery are mostly old and antique Tibetan thangkas. These antique Thangkas for sale in our gallery are not like the ones that are for sale in many tourist and curio shops but are the original and old thangkas specifically imported from various Buddhist monasteries and temples in Nepal and Tibet. Therefore, you should be rest assured about the authenticity regarding the thangkas in our online thangka gallery.