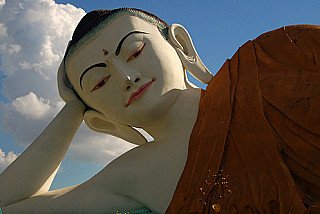 The reclining Buddha is an iconographic representation of the Buddha lying down during the moment of his Mahaparinirvana. It is one of the popular iconographic patterns in Buddhism as they represent the historical Shakyamuni Buddha during his last moments of illness. With reclining Buddha statues, the Buddha is seen lying on the right side while his head is supported by his right hand.

Look at our Buddha Statues

This particular pattern of posture in the Buddha's life seems to have originated at the same time as the other symbols and images of the Buddha, most notably in the Greek influenced Gandharan period Buddhist arts and have been followed by many other regions in their Buddhist art to represent one of the pivotal moments of the Buddha's life. This particular position of the Buddha is better known as the mahaparinirvanasana in Buddhism. Buddha is said to have known that his death was approaching while in this position, the Buddha asked his disciples to make a couch for him in a bush to make it easy for him to lie down. Although he had attained enlightenment and became the Buddha, as a human being, the Buddha had to leave his physical appearance. This moment is believed to have taken place in Kushinagara in India when he was eighty years old. Therefore this physical demise of the awakened world is termed as Mahaparinirvana, the state beyond Nirvana.